No pressure Ulcers in Trosa – thanks to training

No pressure Ulcers in Trosa – thanks to training

– "I called around yesterday morning and found out that there are currently no pressure ulcers in elderly care homes in Trosa,” says Occupational Therapist Ulrika Nilsson proudly and notes that a major reason for this is the training healthcare professionals have received.

According to Ulrika, it all began at an accessibility trade fair in Västerås a few years back.

– At the trade fair we met Anne Lindeborg from Care of Sweden. She spoke so clearly and used such straightforward language that we asked her if she would be willing to come and train us, says Ulrika Nilsson.

At the time, it was felt that there were shortcomings in Trosa regarding procedures for pressure ulcers.

– Those of us in working rehab often came too late, after a pressure ulcer had already formed. There were shortcomings both in terms of knowledge about pressure ulcers and preventive work. Several factors contributed to the situation and, furthermore, a Lex Maria report had been issued regarding a truly terrible heel ulcer on a patient. Something needed to be done, says Ulrika. 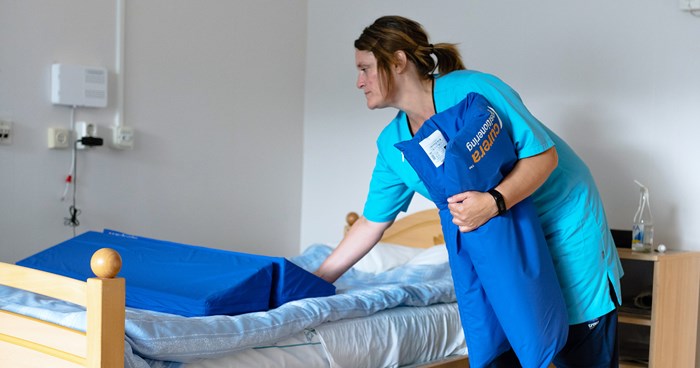 – All nursing staff attended the training course to learn how to spot early warning signs. Such as when a patient, who has previously been up and about, suddenly begins spending more time in bed. And making sure to check the condition of a patient’s skin every time they are showered is another way to involve all personnel.
Ulrika says that training also serves to further develop invaluable healthcare personnel and make them part of the team surrounding the patient.

Now a natural part of the work

The wards did not have reliable access to positioning pillows, so the staff had to make do with whatever they could find. And because occupational therapists and physiotherapists do not work weekends, patients sometimes had to wait until Monday if a member of staff discovered something late on a Friday.
– We bought support wedges and multi pillows for care personnel to make use of. All staff received training to ensure they understood how the aids were to be used, and both written and oral instructions were provided, says Ulrika.
Ulrika is very pleased that care personnel have become more involved. They ask questions when there is something they are wondering about, and the work with pressure ulcers has become a natural part of nursing work.
– And when they see that their work is making a difference, it motivates them further!

"The big ‘aha!’ moment came in the realisation that the alternating pressure mattress is not a substitute for turning." 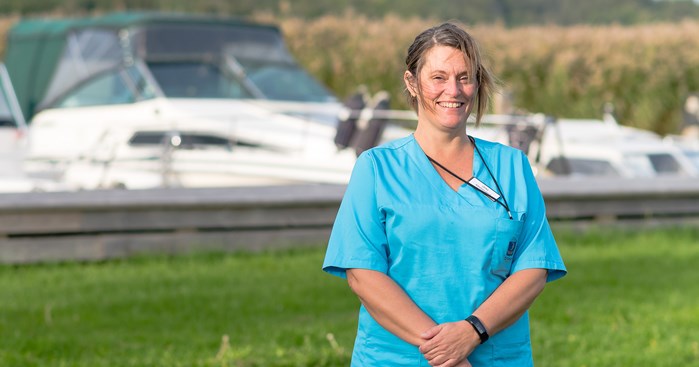 All unit managers we required to attend the most recent training course, and they gained better understanding.
– On their own initiative, they have started formulating procedures regarding mattress inspection, etc, says Ulrika Nilsson.
In Trosa, the Optimal 5zon mattress which prevents pressure ulcers from forming has been in standard use for several years. But staff involvement had increased.
– If the staff notice damage to the cover, they report this. They are looking at it from a brand-new perspective.
– But the big ‘aha!’ moment came in the realisation that the alternating pressure mattress is not a substitute for turning – it has served as a good reminder. The mattress is a supplement, but you don’t always have to turn a patient over fully, a few degrees may be sufficient. Support wedges can be useful for this, and you don’t have to wake the patient in the night. Sleep is also important for convalescence, and this is something we factor into the equation. Furthermore, it’s important to use caution when moving patients with pressure ulcers, and to ensure it is done as gently as possible, says Ulrika.

Ulrika also feels that the training as resulted in good routines and clearer division of responsibilities. Personnel know to always contact a nurse first (since there is always a nurse on hand who is responsible for the patient’s care), that the occupational therapists work a lot with relief and support aids, and that the work of physiotherapists involves relief and movement in order to get the blood flowing.
– It is naturally a team effort, and the training has really produced results!, says Ulrika Nilsson.

This article was first published in Care Magasin No. 2, 2018